YKK Corporation won the Prime Minister's Award (Grand Prize) for its QuickFree® zipper at the 12th Kids Design Awards, hosted by the Kids Design Association, with the award ceremony held on September 25, 2018.

QuickFree® has enhanced usability and is easy for small children to manipulate. Being able to dress themselves helps small children feel a sense of achievement and encourages their independence. The zipper also has a quick release function, the result of YKK's pursuit of safety and comfort. QuickFree® was selected as a 12th Kids Design Awards winner on August 24, 2018. YKK will remain committed to the development and proposal of new fastening products like QuickFree®.

Reason given by the Kids Design Association for awarding the Prime Minister's Award
Hoods and drawstrings on children's clothing getting caught on slides and other playground equipment or on doorknobs can lead to chocking and other serious accidents. Countermeasures such as the establishment of Japanese Industrial Standards (JIS) for children's clothing (safety standards for drawstrings) are being implemented both by the Japanese government and private sector. This product takes a new, unconventional approach—that is, to contribute to greater safety by making improvements to zippers. In the past, a concern related to zippers was devising ways to ensure that closed zipper teeth would not pull apart when sideways force was applied. However, this product was the result of realizing that it is sometimes better for the zipper to pull apart. It is a good example of a new direction that can be taken in terms of design and function. By being adopted for use in a great number of clothing and paraphernalia, this zipper could revolutionize the concept of the zipper, an undertaking worthy of the Grand Prize. 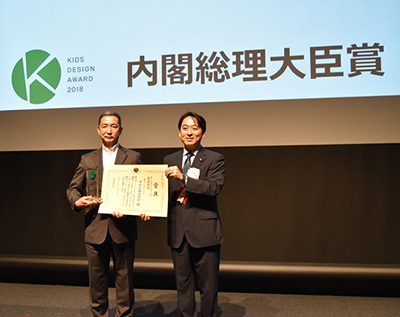