July 5, 2018 Building K, Third Block, of Passive Town Becomes the First in Japan to Be Named Winner in the 2017 LEED Homes Awards

Building K (architect: Miwa Mori) of the third block of Passive Town*1 that is under development by YKK Real Estate Co., Ltd. (Head office: Chiyoda-ku, Tokyo; President: Tadahiro Yoshida) in Kurobe City, Toyama Prefecture, was named a Winner of the 2017 LEED Homes Awards, which is the highest award. It was the first in Japan to be named a Winner.

LEED*2 is a certification system developed and operated by the U.S. Green Building Council (USGBC) for environment-friendly building construction and area development. In October 2017, Building K of the third block of Passive Town became the first in Japan to obtain a Platinum certification, which is the highest rank in LEED for Homes. This recent award as Winner evaluated properties around the world that had obtained LEED certification in 2017. In the Outstanding Multi-Family Project category, the Passive Town structure was highly recognized for the reduction in use of building materials through renovation and the reuse of existing company housing (consideration given to life cycle costs) and Building K of the third block of Passive Town was chosen as a Winner. 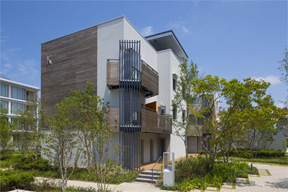 *1 Passive Town
A project that proposes the development of energy-efficient communities and homes that suppress power consumption, such as electrical power and fossil fuels, by using passive design that utilizes natural energy sources and other methods. (See https://www.passivetown.jp/concept (in Japanese only) for more)