A picture-card show club at the Shimonakajima Community Center in Uozu City, Toyama Prefecture, created a picture-card show about YKK founder Tadao Yoshida as a well-known individual who hailed from the area. A reception was held at YKK Center Park in December 2017 in which the children presented the picture-card show that they had created. 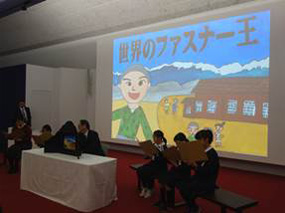 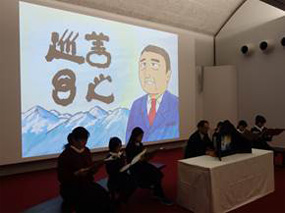 <Picture-card Show Presentation>
The picture-card show traced the 84-year life of YKK's founding president. Starting with his childhood and the background to founding the company after moving to Tokyo, the picture-card show also illustrated how he returned to his hometown to rebuild his company after the Great Tokyo Air Raids, the difficulties he had in product development as well as the move to expand his business overseas. It depicted in an easy-to-understand manner the importance of never giving up at any time using stories from Tadao Yoshida's life.
Sound effects, such as the chirping of skylarks, were used in the dramatic retelling of the story. The practice that children had put into doing the picture-card show was clearly evident as they vividly presented their work. The audience, which included persons from Uozu City Hall, YKK employees, guardians and the public, had a good time watching the presentation.

* Comprehensive Agreement on the Promotion of Furusato Education