YKK ASIA GROUP's flagship regional CSR event took place in Indonesia and India over the course of two weekends in October and November. The continuation of the successful partnership with Real Madrid Foundation (RMF) delivered professional clinics to local coaches and fun-filled and engaging football clinics to underprivileged children between the ages of 8-15 years old. All participating children received a custom YKK/Real Madrid Foundation football jersey along with a complete kit which included a cap, shorts, socks, football boots, a drawstring bag and a certificate of participation. YKK subsequently donated the football equipment used for the event to the participants' communities following the event. It is hoped that this donation will provide a sense of continuity for the YKK CSR program and encourage children to live a healthy sporting lifestyle. 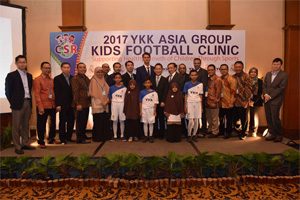 Group photo with the VIPs, RMF coaches, home kids and YKK staff after the press conference 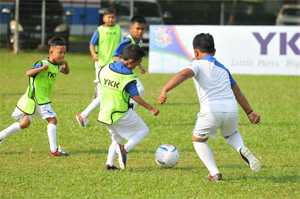 Playing hard during the match 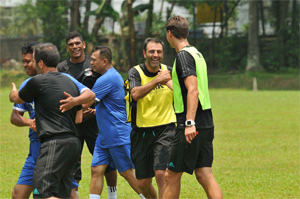 RMF coaches demonstrated and shared their world-class training methods with the local coaches.

YKK was back in Jakarta for the third time. Around 49 members of the media attended the press conference that was held in Crowne Plaza Hotel. The clinics took place in the International Sports Club of Indonesia (ISCI). 30 local coaches attended the coaches clinic and 288 kids were invited from various schools out of which 70 were from Rumah Yatin, a social institution established since 2007. The RMF coaches first demonstrated and shared their world-class training methodologies and techniques with the local coaches. The participating children then spent a fun and interactive training session with them. 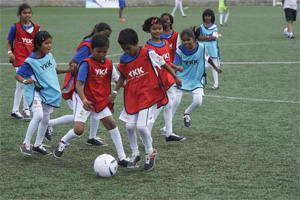 The children spent a fun and interactive training session during the clinic. 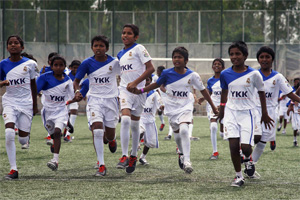 Hand-in-hand, let's cherish our friendships and overcome obstacles together

YKK was back in India for the third time but first time in Bangalore. Previously it was held in Delhi (2009) and Mumbai (2013). The Consul-General of Japan in Bengaluru, Mr Takayuki Kitagawa showed his support by attending the press conference. He praised that the event will help strengthen Japan's relationship with India and how football can be used as a bridge to break cultural differences. A total of 254 local children and 20 local coaches were trained in the FSV Arena in Bangalore. The participating children were from four homes: Surabhi Foundation Trust, Sumangali Seva Ashrama, Need Base India and Katsuri Trust.