On 2nd October, YKK Fudosan Co., Ltd (Head office: 1, Kanda Izumi-cho, Chiyoda-ku, Tokyo) was awarded top prize for its YKK80 Building in the 2016 ASHRAE Regional Technology Awards - Asian Region. The building is the head office of both YKK and YKK AP. The ASHRAE Technology Awards*2 are organized by the American Society of Heating, Refrigerating and Air-Conditioning Engineers (ASHRAE*1).

The ASHRAE Technology Awards are divided between domestic U.S. and 14 regions around the world. The top buildings in each region are nominated for global awards - the final stage in the awards process. YKK80 Building was the first representative piece of architecture from Japan to be selected in the top three at the Regional Technology Awards and has progressed to the elimination stage of the global awards as a result.

In February of this year, and as a first for a Japanese office building, YKK80 Building acquired a LEED-CS "Platinum" rating from the U.S. Green Building Council (USGBC). The LEED-CS program is developed and operated by the USGBC. Moreover, in August, the building earned the top, five-star ranking from Japan's BELS labeling system. The receipt of the above award reaffirms the high quality of the building's energy saving features and environmentally conscious architecture.

Consideration for the environment will continue to play an important role in our ongoing management and business activities.

(*1) ASHRAE (American Society of Heating, Refrigerating and Air-Conditioning Engineers):
ASHRAE is the world's largest international academic society for issues related to heating, ventilation and air-conditioning (HVAC). The standards and guidelines that it publishes are influential and a point of reference for architectural and air-conditioning conferences and related industries throughout the world. ASHRAE was established in 1894 with its head office located in Atlanta, Georgia, U.S.A.
(*2) ASHRAE Technology Awards:
ASHRAE has been running the awards every year since 1999. The awards are aimed at environmental architecture of the highest caliber encompassing energy saving and comfort, harmony with the surrounding environment, and tenant health. ASHRAE opened a Japanese branch last year at which point Japanese architecture gained entry. Regions are divided between domestic U.S., Regions I to XIII and others, making a total of 14 in all. Japan belongs to Region XIII (Asia). YKK80 Building will represent not only Japan, but also the Asian region in the upcoming global award round. 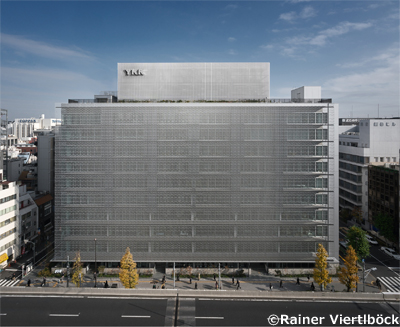